The Holsaeter's Crossbill is a large-bodied bird with a short tail. Males are pink while the females are yellowish-olive. They are easily confused with the two-barred crossbill; however, Holsaeter's has no forked tail and the male only has one wing bar instead of two. They occasionally hybridise with the two-barred.

Sunbirds are a type of passerine bird. There are 132 species in 15 genera. The family is distributed throughout Africa, southern Asia and just reaches northern Australia. Most sunbirds feed largely on nectar, although they will also take insects, especially when feeding young. Fruit is also part of the diet of some species. Their flight is fast and direct on their short wings.

The river martins form a distinctive subfamily. The two species are the African River Martin Pseudochelidon eurystomina, and the White-eyed River Martin Pseudochelidon sirintarae. These are medium-sized, largely black swallows that have a light buoyant flight and feed on insects caught in the air. They appear to be more terrestrial than other swallows, frequently walking rather than perching.

This bird is a species in the genus Empidonax. It is a large genus full of species that look similar. The Acadian Flycatcher is no different, it resembles many of the different species in the genus. It is a small bird found in woodlands and swamps. Its call can be used to distinguish it from other empids.

The Common Raven is a large, all-black passerine bird. Found across the northern hemisphere, it is the most widely distributed of all corvids. It is one of the two largest corvids, alongside the Thick-billed Raven, and is possibly the heaviest passerine bird; at maturity, the Common Raven averages 63 cm (25 inches) in length and 1.2 kg (2.6 pounds).

A passerine is a bird of the order Passeriformes, which includes more than half of all bird species. Sometimes known as perching birds or, less accurately, as songbirds, the passerines form one of the most diverse terrestrial vertebrate orders: with over 5,000 identified species,[1] it has roughly twice as many species as the largest of the mammal orders, the Rodentia. It contains over 110 families, the second most of any order of vertebrates (after the Perciformes).

Platysteiridae is a family of small stout passerine birds of the African tropics. The family contains the wattle-eyes, batises and shrike-flycatchers. These insect-eating birds are found in usually open forests or bush. They hunt by flycatching, or by taking prey from the ground like a shrike. The nest is a small neat cup low in a tree or bush.

Palaeognaths are a superorder of birds, containing the ostriches, emus, kiwis, cassowaries, rheas, stubbills (made-up!), tinamous and their extinct relatives. They are the most primitive of all birds. Most species are found in the Southern Hemisphere.

A darter is a type of bird in the Anhingidae family. Along with the gannets and cormorants, they make up the order known as Suliformes. Their bills are sharp and used to spear fish. They also have long necks and swim with their necks above the water, in which they get the nickname "snakebird". 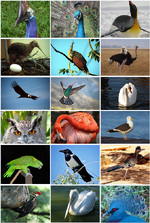 Birds (class Aves) are feathered, winged, bipedal, endothermic (warm-blooded), egg-laying, vertebrate animals. Around 10,000 living species makes them the most speciose class of tetrapod vertebrates. Modern birds are characterised by feathers, a beak with no teeth, the laying of hard-shelled eggs, a high metabolic rate, a four-chambered heart, and a lightweight but strong skeleton. 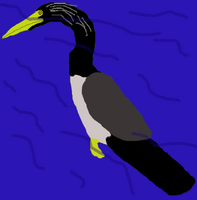 The Frost Anhinga is a species of darter found in Frost region of Devonshire; Potsdam and Shire. The male is a black and grey bird with a white belly and striking white crest feathers. The crest becomes more prominent in the breeding season. The female is mostly a grey bird with no crest feathers. In both sexes, the bill and feet are yellow and the eyes are orange. In juveniles, their feet are mostly dull yellow and their eyes are brown.

This bird is a species in the genus Malacocincla. It is a species of bird in the babbler family (Timaliidae). They are short-tailed and stout birds which forage in pairs in dense undergrowth close to the ground and detected by their calls.

A heron is a type of bird in the Ardeidae. Some species are also called herons or bitterns. The herons are medium to large sized birds with long legs and necks. They exhibit very little sexual dimorphism in size. The smallest species is usually considered the Little Bittern, although all the species in the Ixobrychus genus are small and many broadly overlap in size. The largest species of heron is the Goliath Heron.

Retrieved from "https://allbirdsoftheworld.fandom.com/wiki/All_Birds:_Featured_bird_archives?oldid=7117"
Community content is available under CC-BY-SA unless otherwise noted.