The bird family Petroicidae includes roughly 45 species in about 15 genera. All are endemic to Australasia: New Guinea, Australia, New Zealand and numerous Pacific Islands as far east as Samoa. For want of an accurate common name, the family is often called the Australasian robins. Within the family the species are known not only as robins but as scrub-robins and flycatchers. They are, however, only distantly related to the Old World family Muscicapidae (to which other species with such names belong) and the monarch flycatchers (Monarchidae).

Most species have a compact build with a large, rounded head, a short, straight bill, and rounded wingtips. They occupy a wide range of wooded habitats, from subalpine to tropical rainforest, and mangrove swamps to semi-arid scrubland. All are primarily insectivorous, although a few supplement their diet with seeds. Hunting is mostly by perch and pounce, a favoured tactic being to cling sideways onto a treetrunk and scan the ground below without moving.

Nests are cup-shaped, usually constructed by the female, and often placed in a vertical fork of a tree or shrub; many species are expert at adding moss, bark or lichen to the outside of the nest as camouflague, making it very difficult to spot (even when it is in a seemingly prominent location).

Although named after true robins, the Petroicidae robins, along with many other insect-eating birds, were classified as flycatchers in a huge family Muscicapidae,[1] before being placed in their own family or with the whistler family Pachycephalidae.[2]

The relationship of the Petroicidae to other bird families is uncertain; Sibley and Alquist's DNA-DNA hybridisation studies had placed them in the Corvoidea (a huge group that includes the shrikes, crows and jays, butcherbirds, woodswallows, drongos, cuckoo-shrike, fantails, monarch flycatchers and many others).

In a more recent genetic study, they and several other families came out quite differently. They seem to form a distinct lineage of uncertain relationships, possibly as an early offshoot of Passerida diverging some 44 million years ago. However, all that can be said at present with reasonable certainty is that they are neither core Passerida ("advanced" songbirds) nor a very ancient songbird group.[3]

Acknowledging their position is unclear, current consensus places them as basal Passerida.[4]

A comprehensive review, including an analysis of the osteological characters, by Schodde and Mason in 1999 illustrated three groupings, classified as subfamilies below:[5] Testing of mitochondrial and nuclear DNA revealed some changes, and proposed sinking of Tregellasia into Eopsaltria as the White-breasted Robin's closest relatives appear to be the two taxa of Tregellasia.[6] 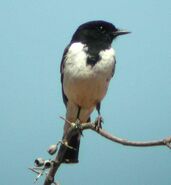 Retrieved from "https://allbirdsoftheworld.fandom.com/wiki/Australasian_robin?oldid=66920"
Community content is available under CC-BY-SA unless otherwise noted.