This article describes the various external parts of a bird, also known as topography.

The two basic parts of a bird are referred to as underparts (ventrum, adj. ventral) and upperparts (dorsum, adj. dorsal).

Size refers to the total length of the bird from the tip of its beak to the tip of its tail. For example, the Broad-winged Hawk is 16 inches (41 cm) long.[1] However, dead birds may appear longer because they were stretched out with "reasonable force" (e.g. a live Western Scrub-Jay is 10 inches (25 cm) and a dead bird may appear to be 11.5 inches (29 cm).[2]

Plumage refers to the bird's feathers.

A bird's bill (or beak or rostrum, adj. rostral) is divided into two parts: lower and upper mandibles. The bill can be curved (e.g. avocets), decurved (e.g. sicklebills), curved to the left as in the wrybill (the only bird known to be like that) or as in the crossbill, their bills are criss-crossed. The top of a bird's bill is known as a culmen.

The bird's nostrils are also called nares. There are specific names for the nares, such as the cere (SEER) - found in parrots, hawks, falcons and owls[3] or operculum (OP-err-CU-lum), which is found in pigeons. Sometimes the nares are see-through which is known perforate. Some seabirds in the order Procellariiformes (pro-sell-ah-rye-ih-FOR-meez [4]) have tubelike nostrils

A casque (CASK) a bony structure found on top of the head (cassowaries) or on the bill (hornbills).

The line of feathers extending from the base of the bill to above and behind the eyes (including the supraloral feathers) is known as the superciliary (is prominent in birds such as orioles) [3]. In some birds, behind the eyes is a postocular stripe found in birds such as hummingbirds [3]. When the postocular stripe and superciliary are the same colour, and set off from the surrounding feathers, it forms an eye line [3].

In birds such as the wattle-eyes, they have an area around their eyes called a eye-wattle, which is brightly coloured red, greenish-yellow (yellow-bellied wattle-eye) blue or purple (female chestnut wattle-eye) [5].

In birds such as owls and harriers, they have a facial disk, it is thought to direct sound to the bird's ears [6].

Parts of the wing

The wing is made up of primaries, secondaries and tertials. Above them are coverts. Wing feathers are also called remex (pl. remiges). 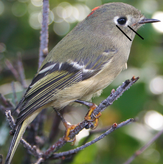 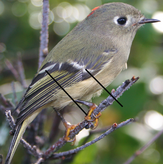 Casque on some hornbills

Casque on a guineafowl
Add a photo to this gallery

Retrieved from "https://allbirdsoftheworld.fandom.com/wiki/Bird_topography?oldid=66414"
Community content is available under CC-BY-SA unless otherwise noted.