This article is about the family Cotingidae. For the genus, see Cotinga (genus).

The cotingas are a large family of passerine bird species found in Central America and tropical South America. Cotingas are birds of forests or forest edges, which mostly eat fruit or insects and fruit. Comparatively little is known about this diverse group, although all have broad bills with hooked tips, rounded wings, and strong legs. They may be the most diverse passerine family in body size, ranging from the 8-cm Kinglet Calyptura to the 50-cm male Amazonian Umbrellabird, although the smaller bird may not be a true cotinga.

The males of many species, such as the cock-of-the-rocks, are brightly coloured, or decorated with plumes or wattles, like the umbrellabirds, with their umbrella-like crest and long throat wattles. Some, like the bellbirds and the Screaming Piha, have distinctive and far-carrying calls. The females of most species are duller than the males.

Most species are polygynous, and only the females care for the eggs and young. Both brilliant male colors and loud vocalizations are the result of sexual selection. Many have striking courtship displays, often grouped together in leks. In such canopy-dwelling genera as Carpodectes, Cotinga, and Xipholena, males gather high in a single tree or in adjacent trees, but male cocks-of-the-rock, as befits their more terrestrial lives, give their elaborate displays in leks on the ground.[1]

On the other hand, the Purple-throated Fruitcrow lives in mixed-sex groups in which one female lays an egg and the others help provide insects to the chick.[1]

Nests differ greatly. Many species lay a single egg in a nest so flimsy that the egg can be seen from underneath. This may make the nests hard for predators to find. Fruiteaters build more solid cup nests, and the cocks-of-the-rock attach their mud nests to cliffs.[1]

A number of species previously placed in this family have recently been placed in the family Tityridae (genera Laniisoma, Laniocera and Iodopleura) or incertae sedis (genera Oxyruncus, Phibalura and Calyptura).[2] 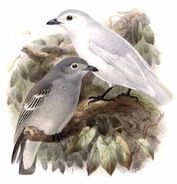 Retrieved from "https://allbirdsoftheworld.fandom.com/wiki/Cotinga?oldid=70578"
Community content is available under CC-BY-SA unless otherwise noted.