The Golden-headed Manakin, Pipra erythrocephala, is a small passerine bird which breeds in tropical South America. It is found from Panama, Colombia and Trinidad south and east to the Guianas and Brazil and northern Peru. It is not found south of the Amazon or the Ucayali Rivers.

It resembles the Red-capped Manakin. 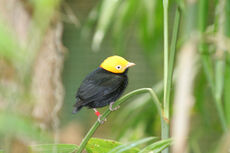 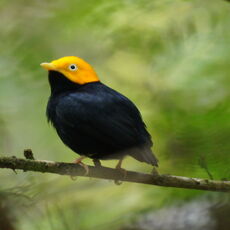 Add a photo to this gallery

Female closely resembles female Red-capped Manakin, but has darker bill and legs and somewhat longer tail[2]. In Brazil, there is no range overlap[3].

Similar to Red-capped Manakin in habitat and behaviour; however, its voice is different[2].

Its voice is different from Red-capped. A variety of whirring, buzzy, and humming sounds, but without the loud snaps[4][2].

Retrieved from "https://allbirdsoftheworld.fandom.com/wiki/Golden-headed_Manakin?oldid=44497"
Community content is available under CC-BY-SA unless otherwise noted.