Mohoidae is a family of Hawaiian species of recently extinct, nectarivorous songbirds in the genera Moho (ʻŌʻōs) and Chaetoptila (Kioea). These now extinct birds form their own family, representing the only complete extinction of an entire avian family in modern times,[1] when the disputed family Turnagridae is disregarded for being invalid.

Until recently, these birds were thought to belong to the family Meliphagidae (honeyeaters) because they looked and acted so similar to members of that family, including many morphological details. A 2008 study argued, on the basis of a phylogenetic analysis of DNA from museum specimens, that the genera Moho and Chaetoptila do not belong to the Meliphagidae but instead belong to a group that includes the waxwings and the Palmchat; they appear especially close to the silky-flycatchers. Hawaiian honeyeaters did not evolve from the similar looking Australasian honeyeaters, but instead represent a striking case of convergent evolution.[1] The authors proposed a family, Mohoidae, for these two extinct genera.[2] 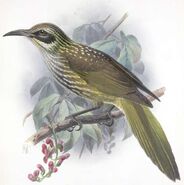 Kioea
Add a photo to this gallery

Retrieved from "https://allbirdsoftheworld.fandom.com/wiki/Hawaiian_honeyeater?oldid=58613"
Community content is available under CC-BY-SA unless otherwise noted.