Holsaeter's Crossbill, Loxia holsaeterii (LOCK-sih-ah[3] hull-set-TER-e-eye) is a species of crossbill. It is named in honour of a teacher the author knows. They are found in Devonshire, Shire, Italy and Aquitani. It migrates to northern Africa.[alt. univ.]

It is a fairy common and occasional passage migrant in varying numbers.[4]

Large, chunk finch with large heads and bull necks, long wings, square tail, plus heavy bill[5] with twisted upper and lower mandibles, the tips of which overlap; wihch help it extract pine or fir kernels, from the woody cones.[6] Unpredictable and often elusive. Resembles and acts like a miniature parrot, but has crossed mandibles.[4]

Tip: move your mouse over some terms to view a definition. Only works on desktops.

Males are bright pink overall[8] with one white wingbar[note A] and dark wings, rump[note B], crissum[note C] and tail. In males, the pink may be replaced with orange, which is rare.[9]

The female is mottled yellowish-olive with a darker olive-green back. The hen's wings are dark grey and tail is dark grey to black; rump and crissum are yellow, unlike the males.

Both sexes share these same characteristics: light yellow bills, the flanks[note D] closest to the wings are greyish-white and their feet are both dark grey to black. 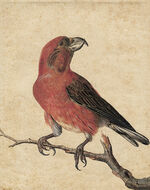 The male resembles a Two-barred Crossbill, however the Holsaeter's has one wing bar. It is rarely found with two wing bars, less than 1% of the population have two wing bars.[10] The tail is not forked, unlike the other crossbills; however, this might be hard to see when in the field or when the bird is facing the person viewing it.

The female Holsaeter's resembles the Red Crossbill, but Red's tail is crossed and the hen's back is "scaled" olive-green. The Red Crossbill very rarely has wingbars, too, but these are more narrow and tertial tips are evenly fringed white and do not have white at sides.[5] It is also larger than Red, with a heavier bill, like that of the Parrot Crossbill.

Pine Grosbeak lacks the crossed bill and is shorter.

Other pink or red finches are smaller.

It very rarely hybridises with the Two-barred Crossbill. Males are known to hybridise with the Red Crossbill, but this is very rare. It is unknown whether the offspring are sterile or not.

It is often elusive, but its presence may be betrayed by falling cones.[4] They often go unnoticed and easy overlooked, unless one listens for their calls[11] and looks for discarded cones and wing seeds on the ground.[11][5]

Feeds acrobatically in conifers, sliding along branches and moving from twig to twig using its bill.[4] When faced with a food shortage, they will move outside their normal range, this phenomena is also known as irruption.[6]

Conifer seeds, particularly that of the Devonshire fir (Abies devonshirensis)[made-up sp.], Devonshire pine (Pinus dunni)[made-up sp.] and spruces (Picea). The seeds of willows, birches, maples and other trees are eaten.[11] It sometimes eats insects and spiders[12], as well as fruit and will prey upon invertebrates when feeding young.[6] Prefers rowan berries in winter.[5]

The tough scales protecting the seeds of pines are pressed tightly together, and the seeds are hidden deep inside the cone - the crossbill can easily pull them out, as their bills act like a lever[13]; they use one foot to help onto to the cones.[11]

They hang upside-down, over the end of a limb to work at the cone from above. They insert their bills between the scales of the cone, and use their mandibles to hold the scales open while their flexible tongues lift out the seeds.[13]

It is sometimes found on roadways picking up salt and grit[14] and is sometimes killed by cars when licking off salt on highways[3].

The rarely descend to the ground, usually to drink or when the pine or fir crop is poor.[6]

Crossbills come to sunflower and thistle seed, and sometimes to sources of salt.[11]

High-flying family parties attract attention by their repeated loud, metallic calls.[5] A dry echoing chipp-chipp-chipp, kip-kip-kip, or chiff-chiff-chiff[12]. Nasal twitterings are not uncommon, but hard to hear. Song is a mixture of trills, twitters and contact calls[4]; is fast, varied and twittering, Siskin-like.[15][5] In flocks, they will also utter low twitters to one another when feeding,[11] although often silent.[5]

The males during courtship whistles and warbles from a perch in a treetop, or sings while flying in circles above the female.[11]

They lay 3-4 eggs, which are whitish-blue with reddish-brown markings[6] or pale blue or green eggs marked with brown or black.[11] The female incubates the eggs 12-14 days.[11] The chicks fledge after 17 days.[11]

Rarely parasitised by the Brown-headed Cowbird[3].

It is native to Europa. Found in larch, fir or pine forests.

^C Simplified version of the definition of crissum.

It is based on the Two-barred Crossbill and Red Crossbill, in which much of the info comes from.

Retrieved from "https://allbirdsoftheworld.fandom.com/wiki/Holsaeter%27s_Crossbill?oldid=59130"
Community content is available under CC-BY-SA unless otherwise noted.