The sunbirds and spiderhunters are a family, Nectariniidae, of very small passerine birds. There are 132 species in 15 genera. The family is distributed throughout Africa, southern Asia and just reaches northern Australia. Most sunbirds feed largely on nectar, but also take insects and spiders, especially when feeding young. Flower tubes that bar access to nectar because of their shape, are simply punctured at the base near the nectaries. Fruit is also part of the diet of some species. Their flight is fast and direct on their short wings.

The sunbirds have counterparts in two very distantly related groups: the hummingbirds of the Americas and the honeyeaters of Australia. The resemblances are due to convergent evolution brought about by a similar nectar-feeding lifestyle.[1] Some sunbird species can take nectar by hovering like a hummingbird, but usually perch to feed.

The family ranges in size from the 5-gram Black-bellied Sunbird to the Spectacled Spiderhunter, at about 45 grams. Like the hummingbirds, sunbirds are strongly sexually dimorphic, with the males usually brilliantly plumaged in iridescent colours.[2] In addition to this the tails of many species are longer in the males, and overall the males are larger. Sunbirds have long thin down-curved bills and brush-tipped tubular tongues, both adaptations to their nectar feeding.[3]

The spiderhunters, of the genus Arachnothera, are distinct in appearance from the other members of the family. They are typically larger than the other sunbirds, with drab brown plumage that is the same for both sexes and long down-curved beaks.

In metabolic behaviour similar to that of Andes hummingbirds,[4] species of sunbirds that live at high altitudes or latitudes will enter torpor while roosting at night, lowering their body temperature and entering a state of low activity and responsiveness.[2][5]

Sunbirds are a tropical Old World family, with representatives in Africa, Asia and Australasia. In Africa they are found mostly in sub-Saharan Africa and Madagascar but are also distributed in Egypt. In Asia the group occurs along the coasts of the Red Sea as far north as Israel, with a gap in their distribution till Iran, from where the group occurs continuously as far as southern China and Indonesia. In Australasia the family occurs in New Guinea, north eastern Australia and the Solomon Islands. They are generally not found on oceanic islands, with the exception of the Seychelles. The greatest variety of species is found in Africa, where the group probably arose. Most species are sedentary or short-distance seasonal migrants. Sunbirds occur over the entire family's range, whereas the spiderhunters are restricted to Asia.[2]

The sunbirds and spiderhunters occupy a wide range of habitats, with a majority of species being found in primary rainforest, but other habitats used by the family including disturbed secondary forest, open woodland, open scrub and savannah, coastal scrub and alpine forest. Some species have readily adapted to human modified landscapes such as plantations, gardens and agricultural land. Many species are able to occupy a wide range of habitats from sea level to 4900 m.[2]

Sunbird are active diurnal birds that generally occur in pairs or occasionally in small family groups. A few species occasionally gather in larger groups, and sunbird will join with other birds to mob potential predators, although sunbirds will also aggressively target other species, even if they are not predators, when defending their territories.

The sunbirds that breed outside of the equatorial regions are mostly seasonal breeders, with the majority of these species breeding in the wet season. This timing reflects the increased availability of insect prey for the growing young. Where species, like the Buff-throated Sunbird, breed in the dry season, it is thought to be associated with the flowering of favoured food plants. Species of sunbird in the equatorial areas breed throughout the year. They are generally monogamous and often territorial, although a few species of sunbirds have lekking behaviour.

Overall the family has fared better than many others, with only seven species considered to be threatened with extinction. Most species are fairly resistant to changes in habitat, and while attractive the family is not sought after by the cagebird trade, as they have what is considered an unpleasant song and are tricky to keep alive. Sunbirds are considered attractive birds and readily enter gardens where flowering plants are planted to attract them. There are a few negative interactions, for example the Scarlet-chested Sunbird is considered a pest in cocoa plantations as it spreads parasitic mistletoes. 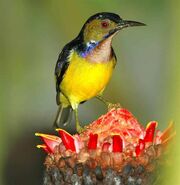 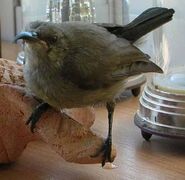 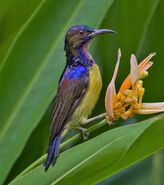 Add a photo to this gallery

Retrieved from "https://allbirdsoftheworld.fandom.com/wiki/Sunbird?oldid=69234"
Community content is available under CC-BY-SA unless otherwise noted.