I was noticing an illustrations in one of my books... how the Yellow-throated Vireo and Pine Warbler look remarkably similar! But why might this be? I have a theory, but I have no idea if it's true, convergent evolution.

What is it? It is when two or more species evolve in separate areas and look similar to each other or when species evolve similar characteristics (bats, birds, pterosaurs and insects all fly). There are several examples, including meadowlarks and longclaws, penguins and auks, flying squirrels and sugar gliders, Thylacine and grey wolf, swifts and swallows, etc.

I find it funny how Wikipedia doesn't even mention the two looking so similar...

The coolest example? Seriemas resemble troodontid dinosaurs! They both have retractable sickle-like claws. If tat doesn't get you thinking about how birds are dinosaurs, I don't know what will.

I'm sure there are more examples than this. 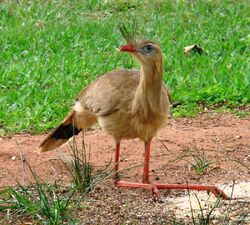 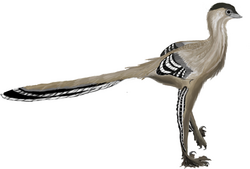 Mei long. Notice the resemblance?
Add a photo to this gallery
Retrieved from "https://allbirdsoftheworld.fandom.com/wiki/User_blog:StaraptorEmpoleon/Yellow-throated_Vireo_and_Pine_Warbler:_convergent_evolution%3F?oldid=32160"
Community content is available under CC-BY-SA unless otherwise noted.